“Protein is life and yet this problem has “so far baffled the fools, and fooled the wise”
—Dr. Richard Olree

“And you shall know the truth, and the truth shall make you free”
— John 8:32

“We have been besieged with more and increasingly severe conditions such as celiac disease; which is addressed with combinations which always include Platinum Plus and Sea-Aloe Gold. Since these people have damaged intake systems, they are deficient in—EVERYTHING.
We are now way past the protein problem and measuring ALL of the various nutrients in the cases presented. This is a new dimension in healing and health.”
— Dr. Brice E. Vickery
The Protein Doctor

Welcome to the World Headquarters of the SuperNutrient Corporation!

In 1980 a virtual lightening bolt struck Dr. Brice E. Vickery, a Holistic Chiropractic Physician and Applied Kinesiologist/Electro–acupuncturist, when he found that according to the Patient’s Body 90% were protein deficient. This through much additional research led to the ultimate answer, which is now available to the World as Platinum Essential Amino Acids Plus or just Platinum Plus. He vigorously asserts that these may be the most important discoveries that are now unfolding in the 21st century, eventually eclipsing the use of aspirin and antibiotics combined. Since the boost in body proteins has proven to produce immune competence it is universal health maintenance for all ages, from toddlers to centenarians. Not everyone should take aspirin. Not everyone should take antibiotics—especially since they largely would not need them. The use of Platinum Plus, especially when combined with two other deficiency answering products that he has developed, namely Vickery Sea Plant Minerals and Glyconutrients©, and Sea–Aloe Gold™ is the means that he himself uses instead of “flu shots” that have proven to be a dangerous guessing game with lives. Since he is perking along full steam at 80, he and his clients are proving that he is right.

Since the applications of Platinum Plus are universal even for the small amount of persons that may adequately digest their dietary protein since they, under stress, can become deficient also. Increased toxic loads require more amino/minerals response to detox mercury, lead etc. in the heavy metals department, xenobiotics such as PCBs, DDT, anesthetics etc., as well as the ongoing 24 hour day combat with the microbe assault upon and within our bodies. Sufficient protein metabolism helps the body to destroy these afflictions.

Dr. Vickery and Eve Pekkala in their continuing research may use the biliary system as an example for ALL body systems. There are a series of some 17– 19 different enzymes that decide how, LDL or HDL, how much cholesterol and /or bile salts to manufacture. Every one of these enzymes contains 40–62% Essential Amino Acids so perhaps the good doctors should put people with altered cholesterol on Platinum Plus before trying dangerous statin drugs such as Lipitor® or do an amino acids profile!

Research at the University of Pennsylvania in 2005 found that when the amino building blocks are NOT available to create a protein this is what may happen:1. The body will search for the amino acids needed up to 500 pathways longer than the normal process. 2. It will not make it at all. 3. It will make a look–alike protein with a completely different function or no function at all. It is possible that this is what happens with cancer cells. It is their opinion that everyone should give serious scrutiny to protein and it’s super ally Platinum Plus because every condition that is examined has, as its most important deficiency — amino acids. Everyone used to think that nutritional supplements were nice little options but this one is a life sustaining necessity.

Platinum Plus is usually so successful that they decided to concentrate on persons who reported not responding to the Fibromyalgia support packages which is easy sailing. What they found were severe mal–absorption, which was often so pronounced that these individuals were so damaged that they could not even absorb ordinary amounts of Platinum Plus which requires no digestion and is in the ideal proportions. This is in itself a test for severe mal–absorption. Proceeding along these lines a new (really old) condition was found to explain the entire process: Celiac Disease. Now this condition may be the most under–diagnosed condition ever and may take 5-10 years to be diagnosed using traditional means.

In these cases once the nutrients (Platinum Plus etc.) begin to be assimilated these people begin to heal as they should. More on this in a special section. Dr. Vickery says that despite the conditions previously named the human’s best defense remains the KISS (Keep It Simple Stupid) formula. There is air, there is water, and there is protein and Platinum Plus ensures this like no other since it is unique, singularly effective, and it is patented.

We had been working on MRSA diligently because we found that this was inhabiting the root canal teeth in very obstinate cases. This then spread to the thyroid, tonsils, spleen, ICV, spine and brain. The difficulty in getting a local doctor to prescribe the proper antibiotic was increased because blood and even blood cultures did not justify this action. So the person suffered and continued in pain and dysfunction. This was found by extraordinary kinesiological testing and not found by our normal screening and identification of the levels.

In desperation we formulated the Staph Protocols using 9 Platinum Plus, 9 Sea-Aloe Gold, 6gms. of C. This was successful to the point that we saved one person from going on Synthroid. The endocrinologist wasn’t even curious as to “What Happened!”

Then we had a case that had rheumatoid arthritis for seven years particularly painful in her elbows and shoulders and spine. After one month on our FM Protocol with improvements but not on the pains. This was unusual so we took a look for the “stealth” staph and found it. We used the Staph Protocol with improvements in pain levels but not total relief. We looked again at all the metals and the joints were filled with them. This was unusual so we put her on Zeolite and the pains were gone in less than two weeks after seven years of pain. We had to sign up with Waiora and are now a “Silver” distributor. As a result of this we now also test for nickel.

Just today a friend of ours was diagnosed with Lou Gherig’s disease and we tested her not having time for complete testing and found: MRSA 2X, legs, bladder, face, ICV, thyroid, spine. Stealth Staph 2X, same but not on face. Strep 6X same but not face. Superstrep, lower right jaw (root canal bothering for ten years) brain, bladder, ICV, spine, face, legs. Her diagnosis for her face had been acne rosacea for years. Her mercury level was 30X and lead was 15X all found in spine, bladder, legs and thyroid. Since we had no former knowledge of any relationship with these bacteria and Lou Gherig’s Disease, it was only because of our new bacterial findings that had us looking at everything with “new eyes.” Using George Goodheart’s formula, “Fix what you find” we will make our recommendations to this nice lady which she will likely take since she has no other hope.

Since the heavy metals seem to retard the removal of these bacteria in the tissues we now include zeolite in our Staph Protocol, which is of course just emerging from the experimental stage. This, however, is with success in all of the cases that we have observed. Most of these cases are severe and of longstanding. Most unyielding cases of back pain even when the diskal lesions are healed (BEV TESTS) are prime examples of these infections.

Many more claims are made for zeolite that extend to bacteria, viruses and other toxic substances that we have not yet examined. This includes a reported success rate with terminal cancer cases. I have no opinion on this. What we do know is all of our test cases removed metals faster than our FM protocol alone and may be included in that protocol also. 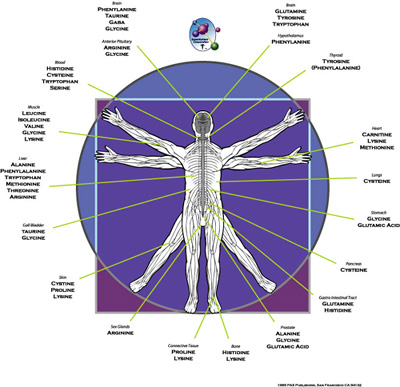 Perhaps the only three dimensional energy graph of a nutritional supplement… 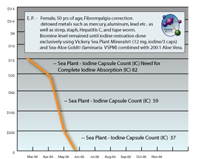 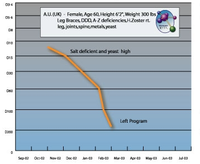 View all Platinum Plus Charts!

Thank You! We are so happy you are doing so well!

“I ordered the fibromyalgia intensive care package and began on September 1, 2002. That first month was HORRIBLE, it hurt and made me sick. But I refused to give up because there was such hope that this would work where nothing else had. That’s how desperate I was. And how it worked!!! By October 31 I was able to go trick or treating w/my kids and not be so tired, in pain, and weak that I would be bed ridden for a whole week. Each day I felt better, each week I could do a little more. By January 1 was at a school signing up for their April classes!
Thank you again.
Beth Slick” 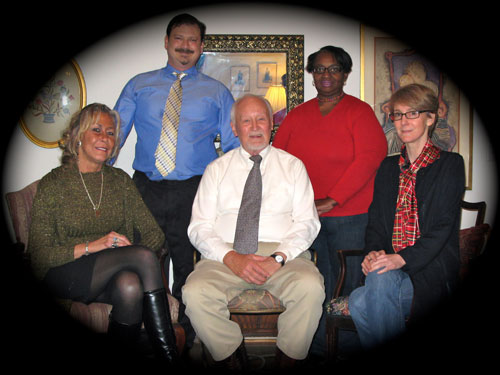 Platinum Essential Amino Acids Plus (Platinum Plus) are now Patented in the US, Great Britain and Europe!

Beware imitators! Platinum Plus is now certified as a unique, patented formula worthy of distinction from countless other amino acids products. Its effectiveness is now becoming legendary.

Created from quantum physics and chemistry, it began as a unique entity. It answers a crying need from the body as first determined by turning off ‘blinking red lights’ on the body’s pancreatic and other acupuncture meridian circuits for the specific enzymic functions of digestion; proteins, carbohydrates and fats as defined by Dr. Rheinholdt Voll. The best enzymes are made by the individual for his or her own body and are never equaled by man’s formulas.

Since most doctors have not reached this advanced technology you may have to ask for your doctor to order a traditional serum amino acid profile to verify the need and benefits of Platinum Essential Amino Acids Plus in combating Fibromyalgia, DDD (degenerative disk disease) chronic fatigue, hypoglycemia, Celiac disease, Crohn’s Disease, depression, and recently, autism. Actual cases demonstrate that an individual can visit up to a 100 different doctors and NEVER have one serum amino acids test ordered! There is air; there is water (often overlooked); and there is protein.

Why do we put MSM Sulfur in Platinum Plus?

Not only can this hinder the detoxification of some sulfur-containing and other toxic chemicals, it can enhance the harmful effects of exposure to cyanide from foods, such as cassava and almonds as well as from tobacco products. The body's ability to conjugate toxins with sulphate is is rate limited by the amount of sulphate present. If there is inadequate sulphate, toxins and metabolites can accumulate, perhaps building up to levels that cause degeneration of nervous tissue after several decades. " From the Liver of the Matter by Linda Lazarides

These statements have not been evaluated by the FDA. These products are not intended to diagnose, treat, cure, or prevent any disease.